HOW THE MONEY SHOULD MOVE IN A BUILDING PROJECT.

Where this approach to money management in a project becomes really powerful is when the pain and gain is applied not just to quantitative targets, i.e. the overall project costs, but also to qualitative goals, such as build quality and long-term performance benchmarks.

The focus of most building contracts is on the transaction; the activity that must be performed and its cost; build this structure, for X amount of dollars. The typical contract used in construction will tell you when and how to pay the people involved in the project and what to do in the event of a dispute. However, what most people don’t seem to see or acknowledge is that the contracts we currently use indirectly encourage, and even reward, participants that concern themselves with their own interest over the interests of the project as a whole. A project that turns out very poorly for an owner, might in fact still be quite profitable for the designers and contractors involved. We don’t suggest you abandon a contract for your projects, on the contrary, it is probably the only thing between you and potential legal turmoil, but what you do need to do is use the right contract; a contract that links the success of the participants to the overall success of the project. In construction, correctly structuring how the money moves around in the project tends to be the most effective motivator for achieving this.

In the typical approach to building there are two sums of money that the client must fund; one for the cost of design and one for the cost of construction. If change of any kind occurs in such contracts, be it change in scope or a change due to design coordination, the size of each sum increases. For example, if the contractor makes an error, the client does not necessarily have to pay them more but the designers may have additional costs in resolving the issue and this will cost them time which the client must pay for. Likewise, if there is an error in some aspect of the design, the contractor will incur additional costs and again the client must cough up. The client gets caught either way here. You might say “just stop the errors in the first place then”, but the typical contract allows these errors to proliferate because it is silent on how well developed the design should be before building begins and there is commonly a disconnect between builder and designer; in most cases a builder may have only a few weeks to understand a design before beginning construction, even though the client and designers may have spent months and years in the design phase. The original size of the two sums of money rarely gets smaller over the course of these projects. If and when the costs increase this naturally leads to conflict between all parties as each blames the other for creating the problem in the first place, leading to further communication breakdown. So in this model, if the project costs spiral out of control, with time and quality goals never achieved, the designer and contractors may still do alright out of it. This just does not make sense. The solution is not rocket science however. 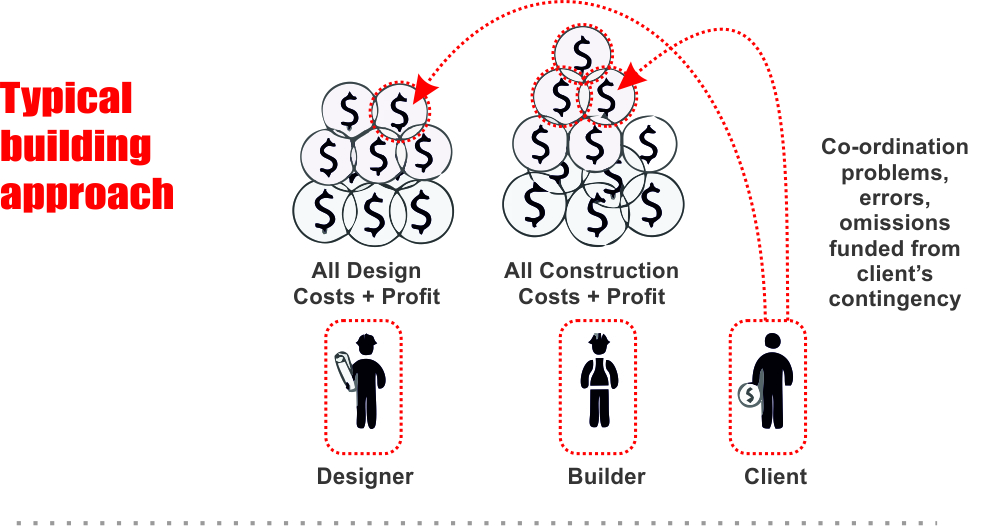 Instead, now imagine three sums of money. One contains the basic cost of the construction, one contains the basic cost of the design, and the final sum combines the designers’ profit margin, the contractors’ profit margin, and the client’s contingency monies. The Unified Building Contract we use sets down that if the basic construction cost rises, then it is funded from the third joint pot, by all parties. If the basic construction cost reduces, then all parties share the savings and the joint pots gets bigger. This requirement alone completely turns the typical dysfunctional building process on its head and results, almost automatically, in reduced costs, reduced timescales, and increased quality, because all gain from working together and all stand to lose from rushing design and not communicating. The participants success is now directly linked to the success of the overall project so they are forced to work together and resolve issues or they all feel the pain. The process, of course, is more complicated than just three pots of money with shared risks and rewards; the monies must be apportioned according to the extent of each party’s expenditure, and goals and targets must be clearly defined, but pain and gain is the engine of this highly effective building approach. Where this approach to money management in a project becomes really powerful is when the pain and gain is applied not just to quantitative targets, i.e. the overall project costs, but also to qualitative goals, such as build quality and long-term performance benchmarks. This model of procurement has been tried and tested over the last 20 years in many countries but is less known in Ireland. 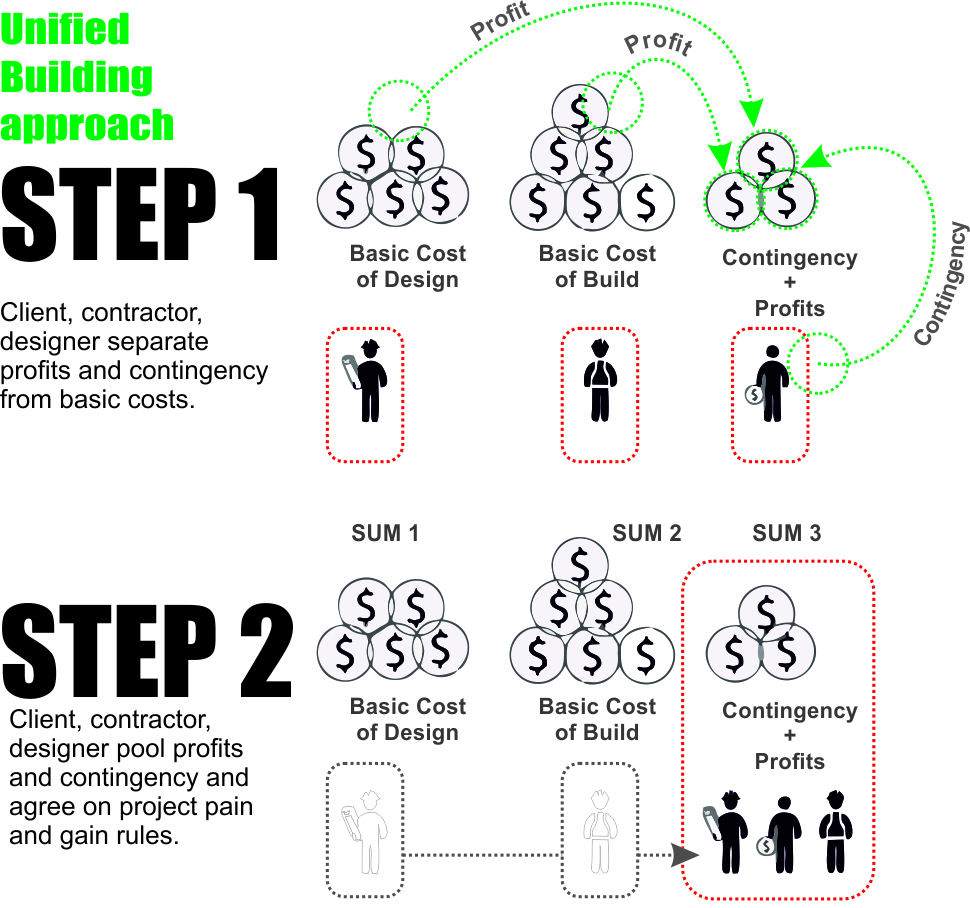 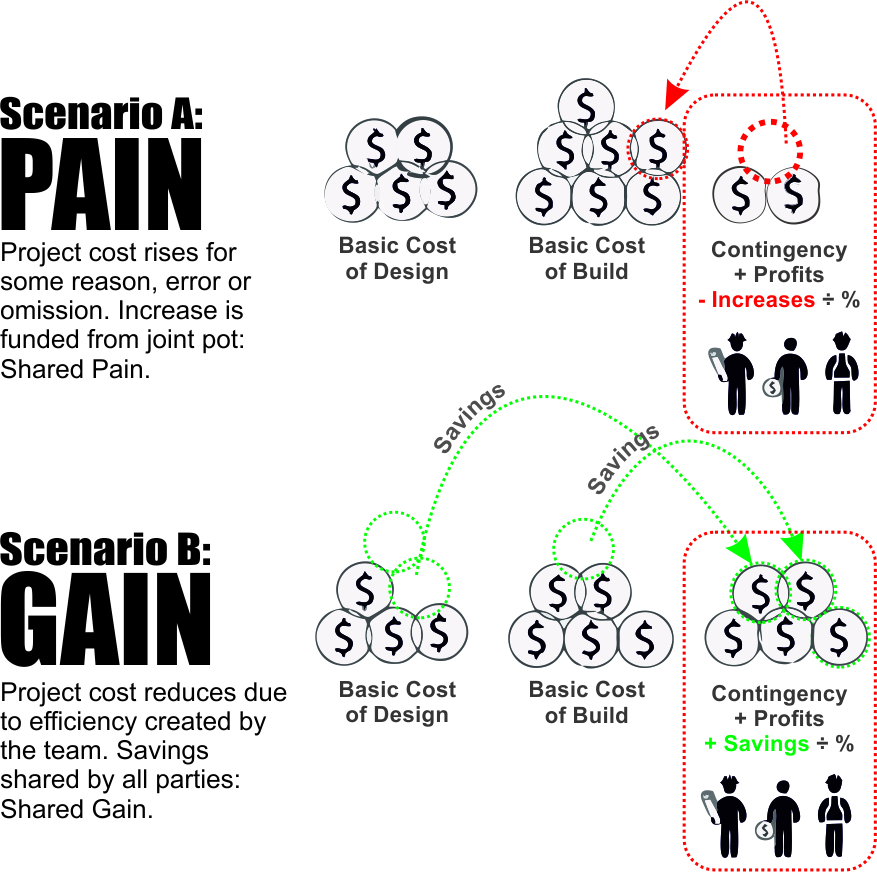 One of the key items for success in collaborative projects (and for success in any project for that matter) is “getting the right people on the bus”; putting in place a team that is capable of the task at hand and has the right mind set, and incentives, to follow through on commitments made. As technological advancement quickens year on year, it means we become more and more independent from each other. The only thing that binds those people together and allows them to work effectively are explicit agreements that require us to truly collaborate with each other, or all will pay a price. Typical building contracts just don’t do this, they do the opposite. This is a simple, but none the less radical, shift in thinking. The approach applies to all building types and scales. We suggest you go to our website www.longform.ie, where we provide information on the tools and tactics that are baked into a Unified Building Agreement, so you can avail of its benefits for your own projects.