What MAD MEN did to your office…

The shifts we see in society at large can be seen in the micro-society of the workplace and the overall form and the artifacts within such spaces reflect this.

It is worth pointing out the effect that broader cultural trends, or changes in trends, have had on our workplaces. The trends I am referring to are illustrated well by the two images shown below. On the left, we have Marie Antoinette in her mid twenties. She is a representative of an elaborate and mature cultural model that was refined over the centuries; a way of life and thinking that evolved very slowly and was probably inherited from the Greeks and Romans. The formality and rigidity of the world that is shown in this painting is striking. But what is the most notable thing about this portrait? Well, the young Queen of France has faux grey hair. She wants to look older than she is and has powdered her locks. This was because the model up to that point lauded maturity. Power and wealth resided in age. Simply put, older people called the shots so it was therefore more of an advantage and more fashionable to be, or appear to be, older. 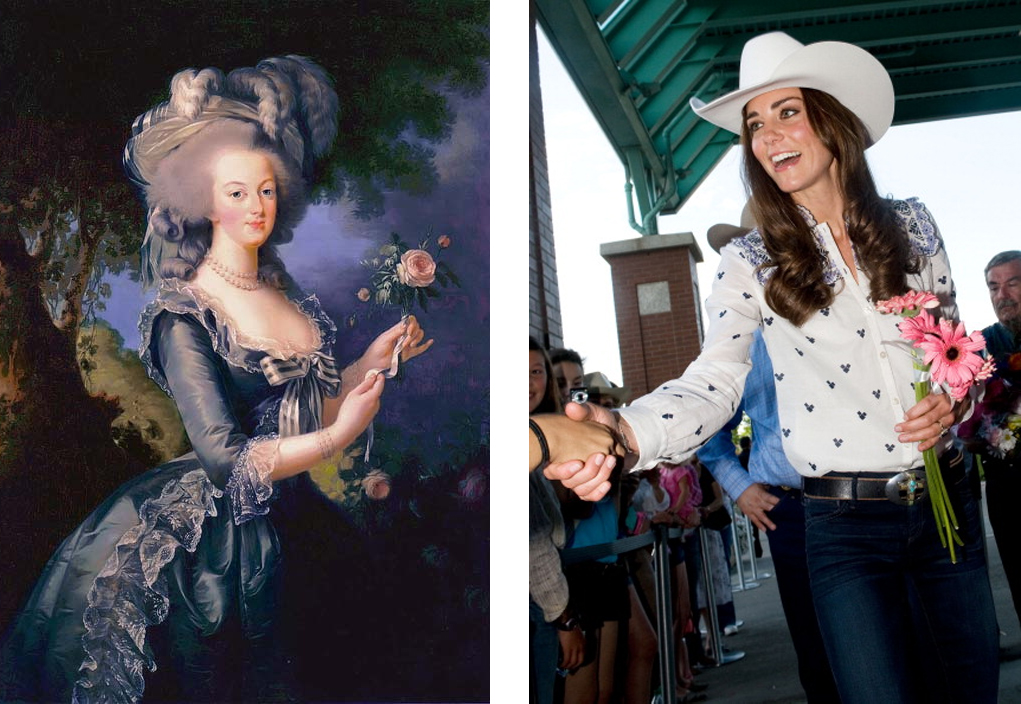 Modern advertising actively changed this perception in the 1950’s when American and British agencies began to realise that adults had already made their consumer choices and were thus less impressionable and more resistant to their marketing campaigns. The ad agencies therefore chose to target younger and younger age groups instead. By gaining the allegiance of adolescents their clients could profit continuously from them in the future. This shift in emphasis had a significant effect on the cultural model we now have where the expression of youthfulness, rather than maturity, is celebrated, if not outrightly worshipped. The model is now much more “bottom-up”, informal, and at times very playful. Crucially, it is continuously changing also. The image of another Royal on the right, Kate Middleton the Duchess of  Cambridge, shown at age 23, reflects contrasting contemporary tastes. The tone she sets is much more informal and much more youthful.

Historians believe that in the past, hierarchical societies survived longest and flourished best whereas today collaborative and less formal cultures are most effective at achieving prosperity. The core components of such prosperity; productive drive, innovation, and creativity used to come from the top down, from upper management, now, these things come from the bottom up. The best ideas are unlikely to come from a manager, they are more likely to grow out of the casual interactions of groups of people at lower levels of an organisation.

The shifts we see in society at large can be seen in the micro-society of the workplace, and the overall form and the artifacts within such spaces reflect this. The office used to be viewed as a place where employees clocked-in and bosses walked the halls like a school principal looking for deviants. A combination of the production-line logic of management approaches like Taylorism and industrial technologies like air-conditioning and elevators created work-pools and later cubicle farms. That kind of workplace has all but disappeared and has been replaced with various versions of the prototypical Silicone Valley “Casual Office”.  Both the videogames and advertising industries naturally embraced the youthful shift. Their working patterns do not conform to the typical nine-to-five grind and their necessarily infantalised staff prefer to work in simulations of their toy-filled bedrooms much of the time. We now see offices hewn out of warehouse buildings with stenciled signage and the occasional chandelier in a concrete basement. At many technology companies, employees are subtly incentivised to pretty much live at the office, in conditions of intimacy that would have been unthinkable a generation ago. The now common espresso bars, the bunk beds and the basketball hoops are the elements of the rec-room, not the workplace. And all of this can be traced back to those people trying to sell you deodorant and toothpaste.

If you like the kind of information we present here and want to understand how workplaces can be designed to increase productivity, creativity, and aid staff retention, get our expanded playbook on making great workplaces. This valuable document covers the history of the office, outlines the latest research and thinking on the subject, and features plans and diagrams that show how a successful workplace should be structured. This is the only report of its kind available free online and you can download it below right now.