OFFICE DESIGN: The Gareth and Tim Problem and a kitchen table for 250 people…

Ultimately, the workplace must provide choice; a full gradation of spaces which include areas of acoustic and visual privacy.

The image below is taken from the hit UK television show The Office. In this particular scene, Tim has built a wall of files between himself and his abrasive co-worker Gareth. Even though this is an extreme and comedic example, the show highlighted a fact of office life; we need to have a choice to get away and be introverted at times. In this case and in many other real-world examples, Tim doesn’t have a choice. 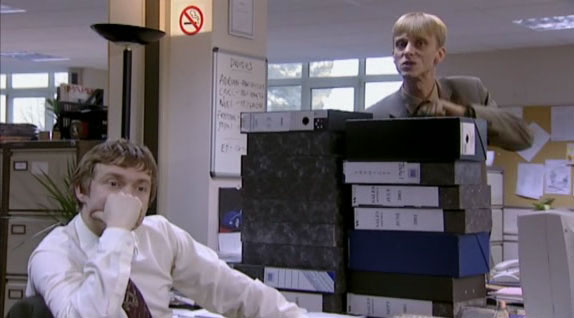 In her book of 2012, Quiet: The Power of Introverts in a World at Can’t Stop Talking, Susan Cain underlines this point when she describes ‘the power of introverts’ and refers to a number of studies that have shown that many individuals prefer to work in a more isolated mode at certain times. Being able to switch to this mode has been shown to increase productivity, and more importantly, facilitate creativity.

In many other studies, when people were asked where they would go to get real work done, most of them named places other than the office, like their home kitchen table! They saw the office as a distracting space to be in. So, the workplace needs to have open and collaborative spaces but also a kind of “wilderness” as Cain suggests where people can go and get away when so desired. Ultimately, the workplace must provide choice; a full gradation of spaces which include areas of acoustic and visual privacy.

Speaking of kitchen tables… a very interesting example of a company that has committed to collaboration and diversity in their workplace is the design agency Mother Ltd., who occupy the well known Tea Building in Shoreditch, the creative quarter within London. The agency was founded in 1996 by four people working from the table in the kitchen of their apartment as it happens. As the company and staff numbers grew, they added a second table to increase the work space, then another table and another. When the founders quickly outgrew their kitchen and first moved from home to dedicated office space they wanted to maintain the same level of intimacy and interaction they experienced around a single table, so they continued pushing many tables together and arranging people around them in their new workplace.

When they moved to a larger office in 2004 they had 70 staff sitting around one bank of tables. However, they projected a future staffing demand of 200! What they came up with was extreme and remarkable; a table for 250 people. Their inspiration was their original kitchen table. The major feature of the new office is now a huge 76m long concrete desk which can seat all the Mother staff in one continuous loop.

If you like the kind of information we present here and want to understand how workplaces can be designed to increase productivity, creativity, and aid staff retention, get our expanded playbook on making great workplaces. This valuable document covers the history of the office, outlines the latest research and thinking on the subject, and features plans and diagrams that show how a successful workplace should be structured. This is the only report of its kind available free online.